The Evetech Champions League (ECL) Season 3 round robin group stage is set to kick off at 14h00 today. Six of the top South African Counter-Strike: Global Offensive (CS:GO) teams will compete against each other for a share of the R50,000 prize pool. Big 5 Esports, Sinister5, Energy Esports, Gravity Gaming, Ex Astris, and Goliath Gaming progressed to the round robin stage from online qualifiers (held between the 20th and 21st of July 2019).

Breaking down Season 3 of the Evetech Champions League

Goliath Gaming are riding high after their recent Syntech Masters LAN victory last weekend, where they came back from the lower bracket to eventually win the tournament. In their run they put Big 5 Esports, White Rabbit Gaming, and Sinister5 to the sword with some impressive plays. The addition of Detrony (who is on loan from Bravado Gaming) has added a lot more quality to their lineup. However, a notable absentee from that LAN final was Energy Esports. 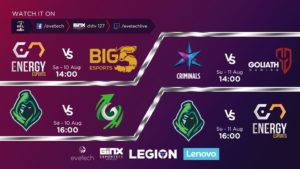 Energy Esports failed to qualify due to forfeiting one of their games (putting them outside the top 4). Energy Esports are a major contender in the local scene, having recently participated in the Starladder Asia Minor after defeating Goliath Gaming in the qualifiers. They also recently earned berth to the upcoming World Electronic Sports Games (WESG) in China, again after beating Goliath Gaming.

Big 5 Esports have appeared to struggle in major competitions this year, while Sinister5 has gone from strength to strength in recent months. Either team could cause some fireworks in the run up to the ECL online finals. Gravity Gaming and Ex Astris are both relatively unknown names to me, but have players that many will recognize.

The prize distribution is as follows: