This past Friday the 13th Mettlestate entered the realm of #PUBGZA. They successfully hosted a FPP Squads tournament which was open to 16 local teams. It was hotly contested and perhaps the catalyst required for the next phase of development in the local scene. The evening, which comprised of 5 maps, was won by NiniNonks. The team led by captain Tyron “ProKill” Bataille featured Sean “scopeZ” McCalgan, Nicholas “Shizznazz” Hayes, and popular streamer Stefano “Nianfo” Batazzi. Interestingly, the team was supposed to live and die with the competition. Having just won the first official FPP Squads tournament in ZA, it’s no surprise that they’re considering sticking together.

It really felt great, especially when the last game made us come from 3rd to 1st. The team was made up from a group of friends, and honestly after our performance, I think we will continue and see where it takes us

It wasn’t all smooth sailing for NiniNonks, who was hovering around 2nd and 3rd position for majority of the evening. Going into the final map they knew who they had to beat and didn’t shy away from the challenge. Employing some high-risk high-reward tactics, they were able eliminate the team who stood between them and the top position. Special mention must go to Big 5 Esports who showed a lot of promise throughout the evening. 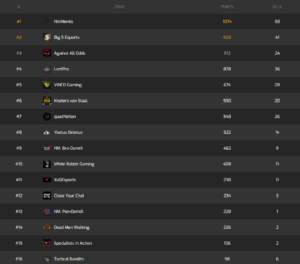 Big5 narrowly edged out in the final map, placing second.

When I quizzed Nianfo on his team’s practice regime the answer was certainly an unexpected one.

We were playing in squads together for the first time that night, but everyone has a very good general knowledge of the game, decent aim, and great chemistry. That alone can take your team far!

The characteristics he mentioned apply to all team-based esports. It’s important to avoid getting stuck in a routine based purely off practice. First ensure that you have all the ingredients required before trying to bake a cake. As far as Nianfo was concerned the format of the competition couldn’t be faulted. In a game where there are a lot of variables based on tournament organiser, formats will always come into question. The main talking point is the amount of points awarded for a kill and placement. It heavily impacts the direction of the game by making one of those aspects more favourable than the other.

The format was brilliant. Points system was on point, and the downtime between rounds was minimal, which made the whole evening a fast pace competitive environment. Absolutely perfect.

As you might have picked up on earlier in the article, NiniNonks had no prospect of longevity. What started as a group of friends entering a tournament has now transformed into a team with goals and aspirations.

NiniNonks was a meme. And it is now a dream. We will continue the local PUBG adventure for Mettlestate’s competitions, and hopefully go further internationally and locally.

This man lands Kar98 shots. Nianfo put up some incredible numbers across the five maps. He picked up 31 kills at an average of just over 6 per map, more than double any other player competing. The runner up was Leetpro’s Crankz. Again he also alludes to the chemistry and trust between the team, which enabled him to play at the best of his ability.

I have to say I felt really great that evening. The team was very supportive towards my bolt-action skills and fully trusted me with the role. They created space, made the calls, allowing me to fully perform. Sure the number of kills was bigger than the average, but in the end the team enabled me to achieve that number! 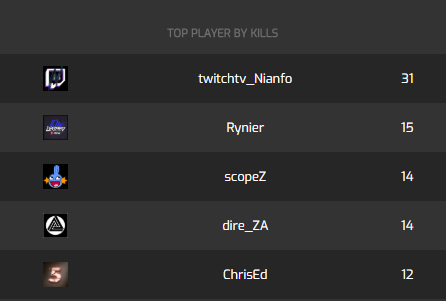 Now that the scene has tasted the highest form of competition, they’re hungry for more. When and where that hunger shall be fulfilled is not yet determined but Mettlestate has hinted at more tournaments in the imminent future.