With Leetpro’s current iteration of players these teams have only faced off against each other twice. Both matches were played on LAN at the 1337Lan in Nelspruit, with Sinister5 coming out ahead 2-1 after a hard fought best of three in the group stages. However, Leetpro returned the favour in a commanding 2-0 sweep in the grand finals. The matches have been explosive so far and have served to amp up a rivalry into something fierce enough to last all season long!

This Sinister5 team (Aghanim, Adastam, Skynet, Traxion, and DotAandDie) have been one of the most stable squads, staying together since the end of the Masters season in 2017. They have fielded strong results – finishing second in their Mega8 Pro 16 group in October 2017, only behind WRG. They also recently finished first in Leg 1 of the 2018 VS Masters in the absence of White Rabbit Gaming who were in China. The Sinister5 boys are showing no signs of slowing down! 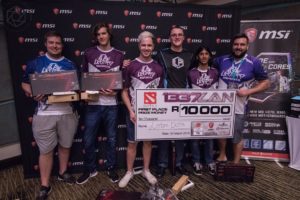 The Leetpro roster, on the other hand, is fairly new. The current roster formed after the disastrous VS Gaming playoffs in February, where they lost in the final round against Epoch Esports in a 60 minute epic, denying Leetpro a spot in Leg 1 of the Masters. After that some big changes were made, with Leetpro bringing in star players Depi, TKC, and Chelsea, who joined  acg and RDK who were already flying the Leetpro flag. This team is not one to be taken lightly. In the short period since they have formed, they’ve won the 1337 LAN and have opened their Masters campaign with a dominant 2-0 victory over second placed Epoch Esports.

How the teams match up

To begin with, let’s look at Leetpro’s offlaner: acg. He’s become a rather versatile offlaner that can adapt to whatever situation he faces. Leetpro can confidently play 1v1 lanes with acg on scaling cores like Razor and can also deal with him getting the sack against a trilane as a Bat Rider, and that’s a really big deal because this enables Leetpro to setup so that their two big core players, RDK and Depi, can have a free game, which is something that not all teams know how to do. On the support side, Chelsea is a typical position four player. He loves playing heroes that roam and make things happen on the map, like Sand King or Tuskar. When those things don’t work out he shouts in his mic that he needs a lane to farm!  He’s the man that dictates the pace of the early game for his team and makes a lot of calls. Lastly we have TKC, the drafter and position 5 player. TKC is a strong believer in the defensive support and I think him honing that role and creating drafts that can work around that, the defensive support plus hard carry combo, could play a very important role in enabling RDK and Depi to win them big games.

Sinister5 have a dangerous tri-core of their own in the form of Adastam, DotAandDie, and the coach ImmortalFaith. Adastam is a player that morphed from being a very farm-centric carry player to one of the more active mid laners in SA, specializing in self sufficient heroes like Razor and Queen of Pain to dominate lanes. His strong mechanics and playstyle frees up the map for his fellow core player Aghanim.  Aghanim tends to play the more farm reliant heroes so it’s important for him to have a free game. In terms of support, DotAandDie,In my opinion is second only to SA’s best support player, Schlinks. The man just puts in work with whatever he plays and has the cool and calm demeanor that can keep a team together in high pressure situations. Immortal Faith, the true mastermind behind the Sinister5 team, has been part of the team from the early days of their formation. He is an integral part of their drafting process and his coaching methodology focuses a lot on getting his players to try think in the correct way in terms of how to win a game of Dota. Once the game starts he has pinned Traxion as the captain who carries out his master plan.

Where it all comes down