Bloemfontein has a new annual calendar event for gamers and cosplayers to take advantage of. It’s called the Kovsie Gaming League (KGL) Star Wars themed LAN, and it’s held between the 4th and 6th of May 2018 at Callie Human (University of the Free State). The LAN is open to anyone and features esports, prizes, cosplay, and much more. I spoke to Matthew Martin to learn more.

Chris “Sargon” House: Can you introduce yourself and how you’re involved with the LAN that’s happening over the weekend?

Matthew Martin: I’m Matthew Martin, born and raised in Bloemfontein. I heard about the Kovsie Gaming League when I was still in high school. I asked the president at the time if I could join the Dota 2 team, but he told me it’s only for university students but once I am at campus I can join. I went to the University of the Free State in 2016 and the KGL had disbanded. I was really disappointed. Last year I found out the KGL had been restarted, so I joined up and started out as the treasurer (on the executive committee). We had a LAN in 2017 as well, which was a moderate success.

I think I watched that LAN from home. Why was it a moderate success?

I watch the Dota 2 internationals, I watch the League of Legends World Championships, I watch all these major tournaments. I picture these massive crowds, but obviously we can’t do that here. Or we can, but it’s difficult. In terms of the attendance and the gaming, that was a huge success. I think I expected too much.

The university liked what we did last year, so they’re helping us by giving us more funds. They also said we can open to the public. This year we’re trying to show the university and outsiders that we’re not just this small town in the middle of nowhere. We actually have professional gamers here. We do actually do this stuff here in Bloemfontein. One of our end goals is trying to get the university to recognize esports as an actual sport. You sign up for any university and you can join an esports team. We want esports to be there.

So the aim would be an esports version of the Varsity Cup?

Why is esports a central focus for you and the university?

Esports is huge. It’s a huge selling point for my generation and the generation underneath me. It’s becoming such an everyday thing. You can go up to anyone, “Do you play games?” The answer 90 percent of the time is, “Yes, I do play some sort of game.” Whether it be on your phone, on your PC, or your console, whatever it is. It’s everywhere, it’s worldwide, it’s global. We need to jump on the bandwagon here in South Africa. I think we need to carve out a piece of the pie in esports.

Will university specific teams be competing at this LAN?

A big part of this tournament, especially for the Dota 2, is to actually headhunt players. To see what Bloemfontein and South Africans have to offer. How good are we? We want to focus on our students here at the university. We want to put together a solid team that we can actually send to other universities to participate in LANs or rAge. The level of competition varies, teams like Sinister5 will be here and then a hodgepodge team that’s just put together.

What would be the plan after putting together a UFS Dota 2 team? Would they get a lot of support from the university?

We are working with our student affairs department. They’re actually helping us get our foot in the door with the university, when others thought what we wanted to do was ridiculous. They’ve given us funding for the LAN events and a direction. They want our university to take part in esports competitions with ivy league universities. They are willing to send our teams wherever they need to go. 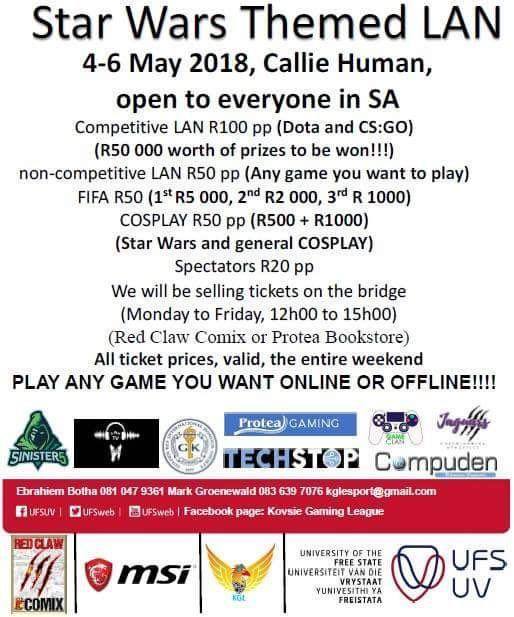 How is this years event different?

We’ve got more sponsors. The casters are coming back. We unfortunately took Counter-Strike: Global Offensive out of the competitive part of the LAN, as there wasn’t enough interest. That gives us more focus on making the Dota 2 experience awesome. We will include CS:GO again, along with titles like LoL when we’ve built up a following. We’ll have food stalls at the LAN this year. We have a live band playing there on the Saturday evening as well, which is interesting. We also have Magic: The Gathering national qualifiers taking place at our event. There is also a casual LAN element this year. There will always be a casual element.

Is it a home grown band?

Yes, it’s a local band. It’s lekker. Another thing that we have changed is we’ve added a theme to our entire event. The Star Wars theme, May the fourth be with you. The final thing that we’ve changed, it’s either going to be a hit or a miss. We’ve added a cosplay element to the whole event.

I don’t think adding cosplay is ever a miss.

Let’s hope so. Bloemfontein is an interesting place! Gaming still has that stigma, so hopefully people get over that and come out!

Anything you want to add before we wrap up this chat?

A huge shoutout to MSI who are our main sponsor this year, as well as all our other sponsors who are helping us bring this to life. We really appreciate it.

Find out all the details you need to know to watch or attend the LAN on their Facebook page here.