It’s an important victory for the locally dominant Energy eSports CS:GO side, especially when you consider that in Season 26 of the same competition last year they were unfortunate to only make it to the semifinals. On the flipside it was great to see a new emerging side in Sinister5 able to make it to the finals, despite the predictable outcome. ESEA CS:GO SA Season 28 registrations are currently open, so make sure you sign up for the South Africa region now. 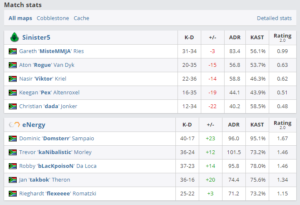