Goliath Gaming's Muzzy next to be caught in racism scandal

Since the article went live, Muzzy has stated that he will no longer play competitive Dota 2, and Goliath Gaming released a statement on the matter:

On this issue, GG is well aware that the allegations relate to conduct which took place as far back as 7 months ago. At that stage, upon having been told of an incident, we conducted our own investigations to determine the accuracy of the allegations. Unfortunately, GG was not in possession of any hard evidence relating to the allegations and, therefore, the allegations amounted to hearsay. Notwithstanding the aforesaid, GG immediately took disciplinary action against Muzzy, based on the hearsay.

The disciplinary action which GG took at that time, was as follows:

Having said the aforegoing, the images which were posted to Twitter over the last day or so, have now only come to our attention and, we deem such conduct as being of the highest offence. Accordingly, GG Management are taking the necessary steps with Muzzy in order to deal with the issue, especially in light of him already being on a final written warning.

Quite unrelated to the above, the “Twitter-Court Opinion” (as can be seen by the recent tweets, and tweets from previous incidences) seem to not like the fact that disciplinary action often tends to happen behind closed doors and is not made a public spectacle of. GG does not believe that making a public spectacle of things will serve any purpose whatsoever. It is entitled to this belief and, so will not get involved in a mechanism such as the Twitter Court, which seems to perpetuate the rife issues which we are all experiencing.

The player has also issued a statement which includes an apology and his plans for the future.

It was just last week we wrote a story recounting how Chad “acg” Simpson had been caught using racist language in his Dota 2 matches. It hasn’t even been a week since that article went live that another top player has been linked to using racist language. This time it’s Goliath Gaming’s Charl “Muzzy” Steyn, and the chat logs on the linked OpenDota match in question put the time that this happened at just seven months ago.

In that link you’ll clearly see the words used, and there’s little disputing that this is the player’s official account. It’s the same Steam account on both OpenDota and on his VS Gaming profile. I can’t say I’m surprised. I did mention last week that the broader community had a significant racism and toxicity problem. This isn’t being addressed at all by the community, and only some TOs have strict policies in place against those who are racist anywhere (to their credit).

As such it was only a matter of time for the other shoe to drop and even more top players to be linked to this sort of behaviour. You can see all the Tweets about it here.

As I said last week, there is no excuse for using this sort of language under any context. However, what is even more inexcusable is not dealing with these issues at all (or admitting fault). At this point in time the player in question has not responded to my request for an interview. Goliath Gaming, however, made sure to respond to the allegations themselves. I’ll post the range of screenshots below so you get an idea of what is being said. But essentially the MGO claims to have disciplined the player when this happened seven months ago. How did they respond to systemic racism in a toxic apologist community? He received two written warnings… 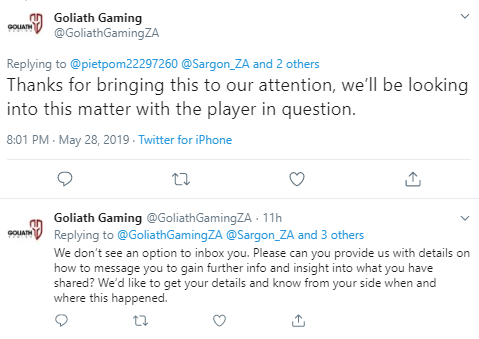 We’ll have a more comprehensive opinion piece out in the coming days to go over this once the dust settles. In the meantime, I’m pretty sure we’re all watching the local Dota 2 implode. There’s probably more coming. 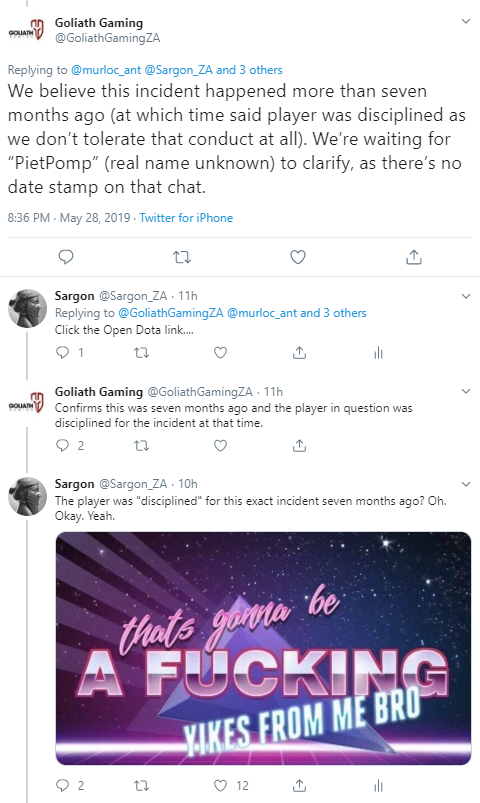 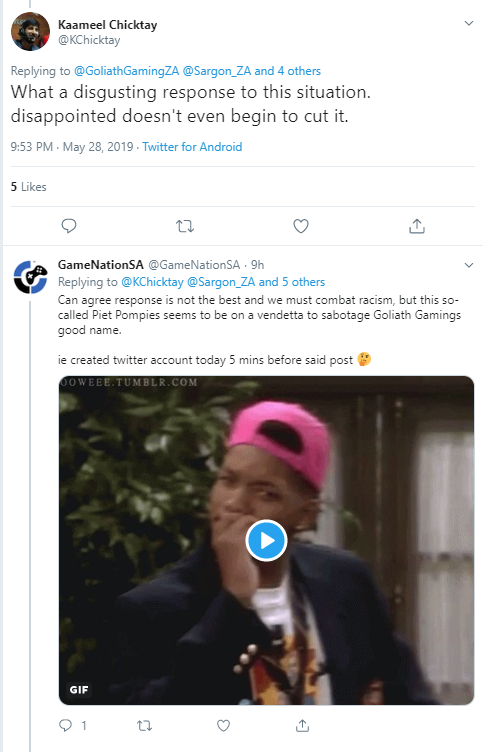 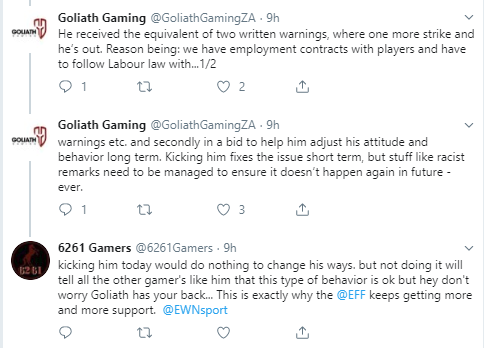