If you’ve been a member of the South African Dota 2 Facebook group for any length of time you’ve no doubt inevitably come across a post that highlights how racism is still very much ingrained within our cultural landscape. These posts are pretty simple. The original post usually highlights clear racism in chat by one (or more) South African Dota 2 players. A screenshot is then taken by a presumably disgusted and deeply offended individual, to be shared via the Facebook group in the hope that someone (anyone) will be able to help stop this behavior. 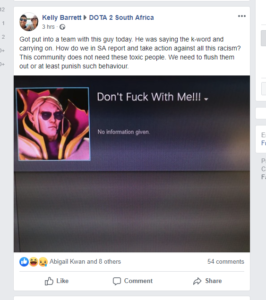 What follows? Well, usually not much. Any hope for our collective humanity quickly disappears as the comments are swarmed by trolls, racists, and apologists. These posts are then usually deleted or removed (no one knows how), but not after 50 plus comments are made. Voices condemning this behavior are very quickly drowned out. In a toxic apologist environment like this, it was always a matter of time before a top tier local player got caught being racist.

This is especially true because there are ample bad seeds that perpetrate this behavior at the very top, and many others who just let it slide. That doesn’t mean there aren’t people who stand up against it. They’re just not the vocal majority or community thought leaders.

The problem with internet anonymity

There are a few problems with racism in Dota 2. The first is that there is zero accountability, because it’s very difficult to link specific Steam accounts to specific people. But this isn’t the case with the most well known players in the country. Their main accounts are all well known, their name change history can be tracked, and their profiles are available on services like OpenDota (A Dota 2 stats tracking site).

It’s the last one that’s vitally important here. These can even track all pings and comments made in game (even in hidden “allied” chat that wasn’t always visible to observers using replays). Then, they’re also linked back to the player’s main account. Since the player is well known, their accounts are usually registered with VS Gaming or Mettlestate. Thus the gaming profile has a name and a face. Hello, accountability.

This is exactly what happened to acg, who last week was accused of using racist and derogatory language in his Dota 2 matches. The evidence was linked to OpenDota, and thus there wasn’t really any disputing whether or not the claims were true. Suffice to say, acg fessed up about using racist language and apologised in a slew of tweets on Twitter (many have since been removed). Instead of jumping to conclusions I opted to reach out to him to ask him what happened. You can read my interview with him below and make up your own mind about his actions. 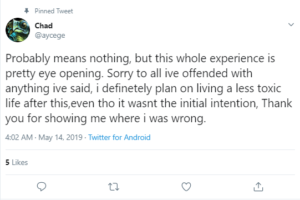 Chris “Sargon” House: Can you explain why you used racially charged slurs during your Dota 2 matches?

Chad “acg” Simpson: I’d prefer not to answer this, [as] I don’t think there’s any valid answer here. Everyone knows the severity of what I said, as well as myself.

How often do you think you’ve used this language in ranked games in the past?

I don’t think I’ve used it often. I used to be a lot worse, and it has come down a lot thanks to the help of my friends. I wouldn’t say its normal by any means, but it does slip out. I genuinely do hope this whole situation fixes my toxic behavior entirely.

Do you think this sort of language is normal amongst ZA Dota 2 generally? In my time I’ve seen/heard it a lot and I know a lot of people turn a blind eye to it. Has that been true for you?

As for the entire community, I don’t play South African servers too often, so it’s hard for me to say. I can only really speak for team mates I’ve had in the past. I can honestly say the “pro” scene in South Africa is far from racist. “Pubs” might be an entirely different situation that I’m unaware of.

I have seen you’ve owned up to what you’ve done, but you’ve also used excuses about Dota toxicity to “explain” what you’ve done. Do you think that this excuse helps/works?

I don’t think that’s a valid excuse, and I fully recognize the things [that ] I’ve said are not ok[ay].

Are you sorry about what you’ve done? How do you plan to go forward and make it up to the communities/people?

I am sorry, but I realize my issues are more [deeply] rooted. I have anger management counseling starting on the 1st of June.

What have been some of the results over the past day or two since the news broke about what you said?

I’ve been suspended from Syntech Masters, and put on probation with Mettlestate. Rightfully so. [My] Twitter DMs blew up, along with my WhatsApp DMs. I’d prefer not to discuss what was mentioned in either.

Do you think that, as a Dota 2 role model in ZA, you can help change the attitudes of people towards using this sort of language?

I can only hope that if people see me change my ways, they will follow. Even if it’s just one to two people, that’s fine. I’ve received multiple suggestions from friends and supporters of things they suggest I do, but I think first and foremost I need to acknowledge what I’ve done wrong, and work from there before I try [to] do anything [else].

How do you think this reflects on the broader South African Dota 2 community? Do you think that the perceived toxicity can ever be remedied?

I think there’s a very false outside view of the local Dota scene. Obviously I haven’t helped this one bit, [and] there are a few bad seeds. But the majority of the scene is honestly some of the nicest and most passionate people you’ll ever meet. Players seem to only want to use Twitter/social media when there’s drama involved, instead of using the platforms to support tournaments/other teams/other players. Which is why a large portion of people believe the Dota scene is just this toxic cesspool. Hopefully one day it will change, and it will be the opposite. Until that happens, the opinion about the local scene will stay the same.

Chad “acg” Simpson reached out to us and asked if he could add a final statement to this piece. His closing statement is as follows:

Please note [that] my views on the scene are from my own point of view, and is completely different to others. I don’t interact with people I don’t know often, and thus I don’t often see the toxicity. And [I also want to add that] what I said is not right. I’m not directing what I said [solely] at anger issues, but in reality it is sadly part of the problem. It’s not the entire problem, and this is one way I felt I could work on it.