The dust settled on the league’s premier division revealing Energy Esports E.D.E.N. (eN) as the victor. A look at the log places them as the undefeated champions, but, not all is at it seems. While eN may have had a successful leg, the remainder of the division was in partial disarray. An unidentified assassin lay in wait.

From top to bottom 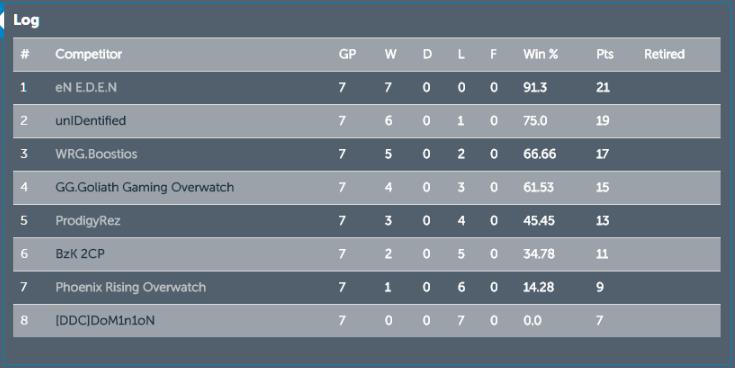 eN took the leg by storm, charging in behind the Reinhardt shield of Koobla. An unstoppable train with well-oiled moving parts, they did not stop until the top was theirs. From the beginning, eN solidified their position as the second leg victors. They showed no quarter in their first match against prem newcomers Prodigy REZ and it was only a taste of what was to come. Using this momentum, they propelled themselves through the rest of the division. It is said that once the juggernaut gets moving, it becomes impossible to stop. eN proved themselves to be this juggernaut and it took a goliath to slow them down, even if only for a fleeting moment.

In the end, only Goliath Gaming (GG) managed to halt their momentum. A colossal task, which saw the team winning two out of the five maps against eN. A small victory as GG became the only team to take a map from eN this leg.

The rest of the matches saw the team conquering their opponents three maps to zero. Even their long-term rivals WRG Boostios (WRG) could do nothing to slow them down. In the end eN ended the leg undefeated, with a 91.3% win ratio. A mighty feat for any team in any division. In a meta so well suited to their roster line-up, I don’t think anyone in the league expected anything else.

While eN’s dominance of the division came as no surprise to most, it was unIDENTIFIED’s (unID) rise to glory that brought the excitement. At the end of the second leg, Brandon “Squishy” Leonard (Co-Captain), expressed uncertainty of his team’s status. However, after a team discussion during the off-season it was decided that the team would stay together and add a higher level of professionalism. The team went about acquiring new members, adding Sygz and Gutbuster to their roster and set their sites on the top spot.

Battle for the top

In round 2 the team faced their first real test, taking on one of the top three contenders, Goliath Gaming. It was a hard-fought battle, Goliath Gaming refused to give unID an inch. In the end they emerged triumphant. The ball was rolling, and things were looking up for the mid-log team. Their next major challenge was WRG. The result was named the upset of the division, as WRG fell to unID’s new found attitude three maps to one. Undefeated, they only had eN to beat. Unfortunately, the undefeated dream was not to be as eN brought the fight to them. The final result was a three zero loss for unID. Second place was theirs.

With the division in shock as unID rose to the top, it fell on WRG and GG to maintain their spots at the top. The two teams fought hard, and despite their surprise loss to unID, the rest was to be expected. WRG finished third and won five out of the seven games they played. Their third-place spot was solidified by their win over GG – a win which saw GG finishing just below them in fourth place. With the top four set, the remainder of the log filled out as unexpectedly as unID’s rise to the top.

Newcomers to the division Prodigy REZ had a phenomenal first bout in prem division taking fifth place. Losing to eN early on did nothing to dishearten the team and their win against 2CP only made them bolder. Their fifth-place finish does not truly reflect the fight they fought. It did however, ensure that they would not be going back down to first division anytime soon. With roster issues and a VS enforced roster lock, only time will tell what happens with Prodigy in the fourth leg.

The bottom three was a somewhat unnoticed competition of who would stay in the division. The ever-hopeful Phoenix Rising, having just returned to prem, had something to prove. Unfortunately, their stay in prem would be short lived as their match against 2CP sealed their fate at the bottom. With 2CP’s prem dream still in sight, it was a sad day to see their first division rivals, DDC, drop off the map. Plagued with roster issues, DDC did not have the leg they would have liked. Unable to win a game, they end the leg at the bottom of the log.

Anything can happen in the fourth leg, and perhaps the Phoenix will rise again.