In short, I think so. I guess you could stop reading here if all you wanted was a quick soundbyte for twitter. It’s a very nuanced topic that requires some discussion and I’d love you to stick around and read the whole thing. I’d like to encourage you to engage in a discussion in the comments after you’ve read my column and have had a chance to form an opinion. Please bear in mind that this is mostly from a Dota 2 and CS:GO perspective.

The glitz and the clamour

Telkom DGL Masters heralded the age of the large prize pool esports events in South Africa back in 2016. The R1 million league and LAN final was announced with much fanfare at a spectacular launch event. Amongst the excitement we were treated to the rather bizarre occurrence of UK esports legend Paul “Redeye” Chaloner jumping out of a giant egg. Sorry Paul, I had to mention the egg! From then on, all the other tournament organizers (TOs) were trying their level best to outdo Telkom (now rebranded as VS Gaming). This was both in terms of the size of their prize pool, and the perceived prestige attached to their events.

Admittedly, it took the competition a while to catch up and find the sorts of sponsors that would enable that level of expenditure. In 2016, Masters was unmatched when it came to opulence in prize money and the lavishness of their stage at the rAge finals for CS:GO and Dota 2. The following year saw the rise of new contenders. First was Mettlestate’s R1 million Samsung Galaxy CS:GO championship, consisting of an online league stage and an impressive offline playoff stage. This was followed by ESL Africa’s multi-million rand online CS:GO league and LAN finals. The battle between VS Gaming and ESL culminated in both entities holding their playoffs at the same time at opposite ends of rAge in 2017. Interestingly both TOs had good fan support, with relatively full grandstands for the majority of the expo. Some of it would be down to expo attendees simply looking for a place to sit, but support still seemed strong from the rowdy local fans. At the time, things were certainly looking encouraging for the growth of SA esports heading into 2018.

As an esports fan, player, or someone more intimately involved in the industry, boundless optimism was the only way to look at it. All signs pointed towards bigger and better events this year. Even the smaller tournament providers were making great strides with their less glamorous but still highly successful events prior to 2018. Evetech Champions League in 2016 is a great example. Mega8’s Dota 2 cup in 2016 and their 2017 CS:GO cup were well-run and a real boon to the scene. Mettlestate even got in on it, with their Valkyrie Challenge CS:GO and Join the Legion Dota 2 showcase events in late 2017. 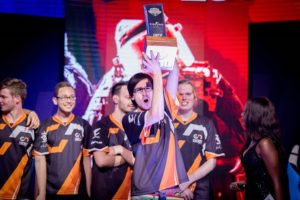 We all assumed VS Gaming Masters would continue to be challenged by ESL Africa, but that has failed to materialize as of yet. Masters is still around with a slightly bigger prize pool, but it seems their focus and vast cash reserves are being focused towards promoting FIFA 18 rather than traditional esports. While I think focusing on FIFA is a good thing for promoting the growth of SA esports, it has left the existing esports fanbase feeling alienated and unloved. As far as anyone has seen publicly, the only sizeable CS:GO and Dota 2 LAN anyone knows of for this year so far is VS Masters at Comic Con Africa.

The lack of alternative large event announcements from other TOs has only served to exacerbate the discontent that’s started to surface on social media. We feel like we were sold on a glittering esports future for South Africa. One in which there would be space for top players to ply their trade as paid professionals. A true ecosystem where everyone could get a return on their investments and fans could have multiple tournaments to look forward to during the year. If that’s what you were expecting, 2018 will have been a massive let-down.

I mentioned the smaller tournament providers a few paragraphs ago. Mega8 announced their next Dota 2 cup towards the tail end of 2017. Teams played weeks of seeding matches in the expectation of an event. Since then, the silence has been telling. It points to it likely never happening. Mettlestate have continued successfully running smaller events like the WESG Qualifiers and the Valkyrie CS:GO league. LeetPro, a team rather than a TO, ran a commendable small event in the 1337 LAN. ACGL have continued their trajectory as the premier console games tournament provider and have run multiple successful small-scale events this year. Outside of Mettlestate and Leetpro, there have been none of the smaller prize pool events we had previously for CS:GO and Dota 2. There’s a gap and a need for smaller events to drive the scene forward, but we’ve seen little in that space.

On the bigger end of the scale, Orena’s R1.7-million OCS held online qualifiers for their LAN which has been pushed back several times to the chagrin of the community. We should have some info on the OCS LAN in the near future on Esports Central. The non-start that was the Cape Town ESWC qualifiers are another subject we will be reporting on.

It’s been a litany of disappointment in 2018. You could call players entitled for all but demanding tournaments this year on Twitter. Which would be partially true. One also has to remember however that the idea they were sold on in previous years was bigger and better things. While I may not quite agree with the style of the complaining, I can at least sympathize with their views to a degree.

While the return on investment (ROI) has arguably not been there for sponsors or TOs in terms of viewership and advertising reach from their big events in the past, most seemed to acknowledge that it was an investment into the future. In the hope that when the size of the local scene caught up to prize pools, they would be poised to reap the benefits as the pioneers in the space. Sustainability has always been a concern of mine and many others in this industry. Hence why I’ve always championed the idea of more smaller events. The sort that are inherently sustainable due to their smaller scale and therefore lower level of financial requirements from sponsors. Mettlestate and ACGL exemplify this style of event organization. For the record, I don’t see a several months long online league for a R50,000 prize pool with no LAN as a positive and sustainable tournament model. The time investment needs to match the prize pool for players and that doesn’t check those boxes for me.

The problem with the big stuff is that it just isn’t sustainable. If a top executive at Telkom decides VS is not worth the expenditure it could go the way of the dodo. If Kwese sports decide ESL Africa is too costly, that might be the last we hear of it. I’m not saying either scenario is likely, will happen, or has happened. I’m trying to illustrate a point. If something is unprofitable for a company, they might pull the plug. Changes in staff mean changes in direction. A company can go from being focused on the future of esports to being focused on cutting costs. Again, I’m not saying that’s happened, but we can’t treat big TOs as a bottomless pit of money and expect them to always be putting on big tournaments. Even if that is the dream they’ve sold to us. That dream is merely astute marketing.

The scene suddenly went massive in 2017. I don’t think it had grown to the actual size yet by that point that it was realistic to expect a similar trajectory in 2018. However, the promises and PR told us otherwise. There’s still plenty of time this year for things to rapidly change, and the many announcements of big future announcements could actually be more substantial than a mere mirage. Either way, I’d like to see more investment in the smaller events so that a sustainable CS:GO and Dota 2 circuit are in place regardless of bigger events occuring. If they happen, great. If they don’t, we should still have a fundamentally sound scene with regular competition and just as regular LAN opportunities to allow players to gain experience. I live in eternal hope.