EGE 2018: Another update on outstanding payments

The Electronics and Gaming Expo (EGE), a gaming/geek culture expo held annually in Cape Town, is in a uncertain place right now. Earlier this year EGE were in hot water because they hadn’t paid esports players or third-party tournament organizer ACGL. This was money owed to players and ACGL for esports tournaments held during EGE 2018 (R61,000 in total). The event took place from 27 to 29 July 2018, some 267 days ago by the time this article goes live. Despite assertions that payments would be processed by the end of February 2019, EGE still haven’t made any payments.

EGE traditionally takes place in July each year, which is in three months. To add more fuel to the fire, the EGE official website appears to have been pulled down around March. Not a good sign that the expo is going to go ahead in 2019 (or manage to pay the amounts owed to affected parties). I decided to followed up with Johnny Malherbe (EGE/Impact Expo) to see if there were any updates about these issues.

CH: Since the EGE official website is down, what does that mean for EGE 2019?

Johnny Malherbe: Not sure why it’s down – but it does not look like EGE 2019 will be happening. Unless another venue is found – EGE cannot happen again – a huge pity. CTICC [is] too expensive, notwithstanding venue costs. But all the add-ons and the fact we are forced to utilise services that anywhere else would be next to nothing. An example is that even though we have managed to get data supplied by sponsors – we still had to pay exorbitant costs as a “corkage” – thousands of Rands (approx. [R]30k for 3 days).

CH: Teams/players still haven’t received any updates or payments. In addition, the timeline for payment you provided has lapsed. Any updates?

JM: This has been a huge problem – as the timeline keeps shifting – apologies to all. I’m looking to keep the company alive and am looking for investors. If I do not manage by end of May, then chances a[r]e I may have to liquidate Impact (Eds: Impact is the company that runs EGE).

CH: Thanks for answering. Anything to add from your end?

JM: EGE is a wonderful product – giving Cape Town its own esports event – equal to anything else in SA, albeit on a smaller scale. It would be a pity not repeating – EGE [has run for] 4 good years. A new venue is being explored as I reply to this mail. Holding thumbs to manage EGE 2019.

After getting those answers from Johnny, I followed up with one more question. I asked Johnny what liquidation would mean for everyone still owed money for EGE 2018. I assume that liquidation would mean that these parties would only get a fraction of the amount owed to them, if anything at all. Sadly, at the time of writing this, I still haven’t received any feedback.

There is also some concern that despite not paying these EGE payments, people who ran EGE are still working in the scene. Of course, I haven’t asked Johnny about this specifically. I have instead added one of the tweets here that has suggested this only yesterday (the poll is still active for a few more hours). It asserts that someone involved at the highest levels of EGE is working at the Rand Show (that took place over this past weekend). The tweet simply asks if the community is fine with this. At the time that this goes live, the community decidedly isn’t. 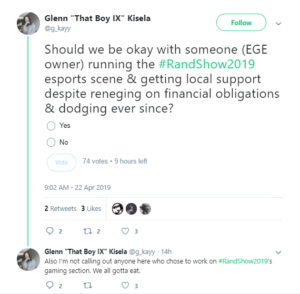 At this point in time it’s clear that without major investment into EGE, the expo is dead in the water. I also doubt any of the affected parties will manage to wrangle what is owed to them without litigation (if at all). It looks all too certain that this is one more sad tale to add to the growing trend of local organizations being unable to honour their fiscal commitments, well after the fact. There’s also the feeling that the issue of poor communication has remained, even after speaking to Esports Central in February 2019 about the shifting payment dates. With the website still down, there’s very little hope that things will turn out positively for everyone involved.