The Witchwood Analysis: Can Control Warlock be beaten in the Year of the Raven?

Many new tools have been added with The Witchwood expansion, but before we look at the shiny new toys, let’s look back at what has been lost with the Standard rotation. One of the best counters to Control Warlock in the Year of the Mammoth was Dragon Combo Priest. This deck loses a few of it’s important tools that enable the Dragon synergy, namely Drakonid Operative and Netherspite Historian, which greatly weakens its power level. Murloc Paladin was another deck that could beat Control Warlock, Vilefin Inquisitor is a big loss to the deck’s early game consistency and power, which was it’s greatest strength against Control Warlock. It helped create resilient board states that could survive some Warlock board clears. So what does Control Warlock lose? N’Zoth, the Corruptor and Mistress of Mixtures. Let’s take a look at how the loss of those two cards can give us an idea of how to beat Control Warlock. 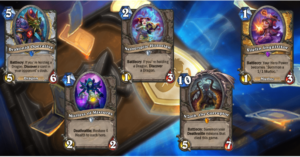 N’Zoth was an important tool for the deck to outvalue other control decks and bring back Voidlords for a second time! Mistress of Mixtures helped the deck survive against aggro decks and heal up after contesting the board. This leaves Control Warlock with two possible weaknesses. You can attempt to outvalue the deck, which still leaves you vulnerable to Rin, the First Disciple. If you can’t go for the value route, you need to kill the deck before the Voidlords can be summoned by Possessed Lackey or Skull of the Man`ari, which leaves you vulnerable to a perfect sequence of board clears. Control Warlock is gaining access to a few new tools, with Lord Godfrey and Voodoo Doll standing out as tools to watch. Neither of these cards address the two weaknesses mentioned above though. Lord Godfrey is another mid game board clear, adding to an already extensive board clear toolbox. Voodoo doll is a card that can be combined with cards like Mortal Coil or Defile to remove a particular threat, but does not really generate any extra value, and might be too slow against aggro decks.

So where does this leave us when it comes to beating Control Warlock? There are two major strategies that can help us exploit the above highlighted weaknesses of Control Warlock: aggro and control. Let’s see what new decks in The Witchwood meta can help us achieve that. 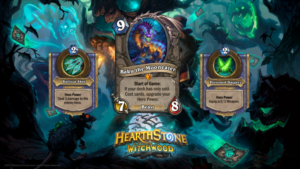 Baku the Mooneater was a much hyped addition in The Witchwood, and it turns out that Baku is pretty good for a couple of aggro decks that can make good use of the upgraded hero power. Hunter and Rogue have been the two specific decks that have been able to make use of Baku the best when it comes to aggressive strategies.

Odd Hunter is reminiscent of old Face Hunter builds, using early aggressive minions like Wolfrider to get in some early SMOrc damage in, then finish off the game with the upgraded hero power and some burn damage. Odd Rogue is similar, sharing some of the same one mana and three mana aggressive cards. Hench-Clan Thug is one of the best new tools for Rogue, which grows when attacking with the Rogue hero power weapon. The use of the upgraded hero power on turn two is fairly powerful in Rogue, where it equates to four damage over two turns, as well as some board control options in addition to synergising well with cards like Hench-Clan Thug.

Tempo/Aggro Mage also has the ability to generate a lot of early damage from the board and finish the game off with the best burn spells in the game. Miracle Rogue is not often considered an aggro deck, but when up against a deck like Control Warlock it effectively falls into that sort of strategy. Utilising powerful tempo tools like Sap to get past any Voidlords and push for lethal damage. Miracle Rogue has neither gained nor lost much with the Standard rotation and The Witchwood. This leaves us with a few Aggro options which have been bolstered by The Witchwood, and could prove troublesome for Control Warlock.

The loss of N’Zoth means that it is possible for some decks to attempt to out resource a deck like Control Warlock. Taking this value orientated line requires certains tools. One needs to be able to efficiently deal with Voidlords, and cards like Polymorph and Mind Control can help achieve that. By transforming a Voidlord we can remove it from the resurrect pool of Bloodreaver Gul’dan, which helps remove a lot of the power of the deck. Taking control of the Voidlords with cards like Mind Control can also remove a lot of value from the Control Warlock deck. Any deck attempting to out value Control Warlock also needs to have enough removal to keep threats under control. This leaves Control Mage and Control Priest as the best options to fulfill the above criteria. 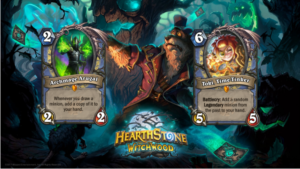 Control Mage has gained some value generating options from The Witchwood expansion. Archmage Arugal and Toki, Time-Tinker are new tools that Control Mage can use to attempt to out value Control Warlock. This is a concept that has yet to be proven in the early days of The Witchwood meta.

Control Priest hasn’t gained any value tools in The Witchwood. Instead the deck has gotten some different tempo tools which it uses to fight for the board. So instead of trying to stick to a value plan, the deck can often burn down the Control Warlock with the power of Shadowreaper Anduin and Mind Blast, an unconventional finisher for what is essentially a control deck. Mind Control and weapon removal allow the deck to deal with the threats from the Control Warlock deck whilst it assembles it’s burn tools. 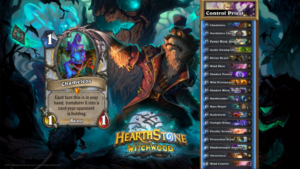 Rin, the First Disciple is the best tool Warlock has to counter these kinds of strategies and can make them less effective. When Rin is used correctly in control mirrors it can be impossible to counter, giving the opposing control deck little time to make the best use of it’s resources. This makes it much easier to try and out value Cube Warlock that often doesn’t play Rin, than the Doomguard-less Control variants. There is one new tool that has been added that can assist in countering Rin. Chameleos is one the new Priest legendaries, which copies a card in your opponent’s hand. This can lead to a situation where Chameleos copies one of the seals generated by Rin, allowing the Priest to be one seal ahead of the Control Warlock, and be the first to summon Azari the Devourer, effectively winning the resource war.

Finally there is a third way to combat a slow deck like Control Warlock, and that is with combo decks. Combo decks leverage a specific set of cards together to go for a one turn kill (OTK) strategy. Malygos Quest Druid was one of the existing decks that used this strategy, only gaining Ferocious Howl and Muck Hunter, which is an additional minion to count towards the quest. A new combo deck has emerged from The Witchwood. Utilising the new Shaman legendary Shudderwock to copy previous battlecries, the deck can achieve a turn 10 kill with a combination of battlecries from Saronite Chain Gang, Grumble, and Lifedrinker. Shudderwock Shaman is the new kid on the block, and whether the deck will stand the test of time, and survive against the rest of the meta remains to be seen. As with all combo decks, it is often very vulnerable to decks that can provide enough pressure before it can reach it’s combo. Like the aggro decks we mentioned previously. 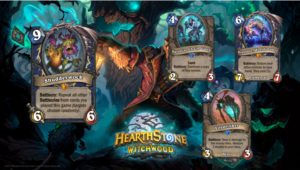 Will any of these strategies be enough to dethrone Control Warlock as the best deck in the game, or will we continue seeing Control Warlock bans in tournaments? The Witchwood meta is still very fresh, and all of the previously mentioned decks will still undergo more refinement before we see them in action in a tournament setting. The European playoffs taking place between the 5th and 6th of May will certainly be one to keep an eye on, to see how the tournament meta develops. Until then, let the deck brewing continue as everyone looks for the “meta-breaker” that can upset the reign of Warlock.

Do you have any innovative ideas on how to dismantle Warlock? Do you think any of the above strategies will be enough? Would you take a line-up built to target Control Warlock to a tournament? Aggro seems like a more consistent strategy than the Control or OTK decks, but that will depend on the rest of the meta. I think that the safer bet is a ban for now, but let us know what you think in the comments below.