Over the past couple of weeks, South African CS:GO teams have been fighting it out in the ROG Invitational II: Soldiers of Fortune qualifiers for a spot in the playoffs. For those who don’t know, this is a R150,000 tournament with a dynamic prize pool. It comes from South African tournament organizer Mettlestate alongside ASUS ROG, powered by Intel and Vodacom World.

The ROG Invitational II: Soldiers of Fortune playoffs is sure to provide a fantastic viewing experience for South African CS:GO esports fans. The playoffs, in the form of a bounty bracket finals, take place this weekend from 18 to 20 September, with the start time being 09:00 SAST on 18 September.

You can catch the action live from the ASUS Republic of Gamers South Africa Facebook page via the live event page.

Check out an image via Mettlestate of the talent who will be guiding viewers through the ROG Invitational II: Soldiers of Fortune playoffs below. 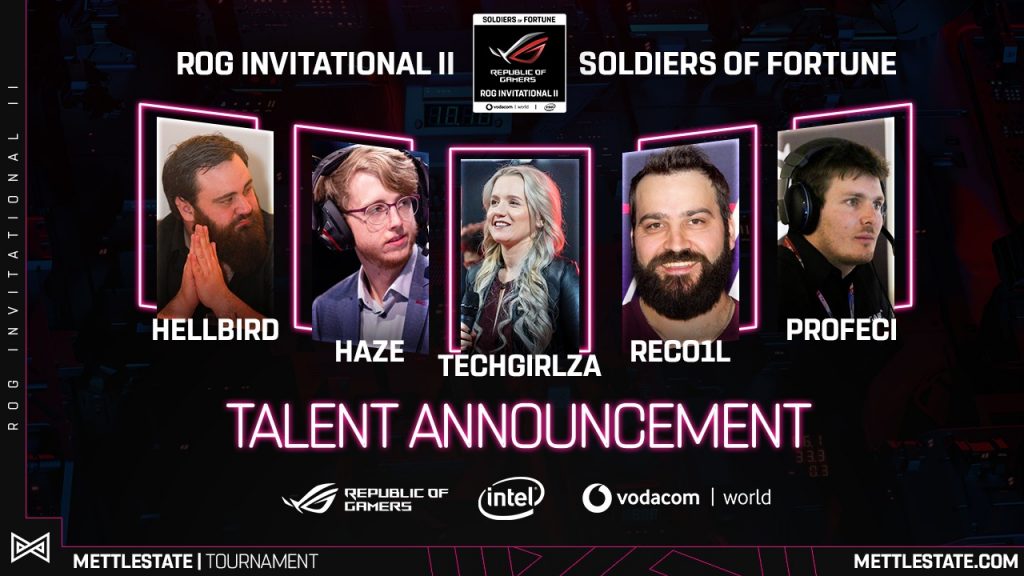 In terms of the South African CS:GO teams competing, the finalists from 2019, Goliath Gaming and Sinister 5 got direct invites. The other six teams had to go through the qualifiers for their spots in the playoffs.

The eight teams are:

These teams will be competing for their share of the massive R150,000 prize pool over the weekend. It is sure to be a fantastic tournament to watch.