Comic Con Africa was announced at a spectacular launch event earlier this year. It was held at Kyalami Convention Centre, the self-same venue that will be hosting Africa’s inaugural Comic Con event between 14 and 16 September 2018. Having attended the launch myself, I felt that it created some palpable excitement and anticipation amongst the various journalists and industry figures that attended. That’s something that doesn’t always happen amongst us jaded gaming industry types. If they were trying to wow us, they most certainly succeeded!

The devil is in the details!

The event has been brought to South Africa by Reed Exhibitions subsidiary ReedPOP in partnership with VS Gaming. Reed Exhibitions are the company responsible for Comic Con internationally. Telkom’s VS Gaming is well known to local esports fans as the company behind the Digital Gaming League, VS Masters, and the recently announced FIFA eWorld Cup Qualifier being held at Montecasino next month.

The event follows the international Comic Con format showcasing comic books, science fiction and fantasy films, television and cosplay. However, unique to South Africa thanks to VS Gaming’s involvement, it will also be featuring esports. After many years at rAge Expo, VS Gaming’s premier R1.1 Million VS Masters CS:GO and Dota 2 tournament will be held at Comic Con. Also present will be a BYOC LAN, in a similar vein to the NAG LAN, also traditionally found at rAge. Their alignment with Comic Con has clearly brought with it some rather massive changes for VS Gaming in 2018.

Straight from the source

We needed to know more, so I managed to speak with VS Gaming’s Wanda Mkhize to get some inside information on their plans and thinking around Comic Con Africa.

axtremes: Could you tell us about your position at VS Gaming and explain how it relates to Comic Con Africa?

Wanda Mkhize: I am the Executive of Content and Spokesperson for VS Gaming. One of our key focuses at VS Gaming is looking at entertainment properties and driving entertainment in all its forms. I think Comic Con Africa is a perfect fit. It combines gaming, content, and pop culture. The full entertainment spread. We’re very excited! It is bringing the best of pop culture to South Africa and blends exactly with Telkom’s strategy for creating entertainment.

There is some crossover between comic book and gaming fans, but it isn’t something we’ve seen combined in this way before. You don’t usually see comic book conventions and gaming together. Why do you feel it is a perfect fit?

I think we need to acknowledge that internationally the gaming and comic book markets are each relatively large in their own right. In South Africa, both are still fledgling markets. We’ve also seen with the local tournaments we’ve run, there tends to be some level of interaction that takes place. As Telkom we’re looking at entertainment in its entirety. We see content in the form of video, entertainment, music as well as gaming forming part of a whole entertainment ecosystem. What better avenue than an event as iconic as Comic Con.

I think we almost found each other. Reed as owners of the license for Comic Con, had been looking at proposals from companies looking to bring Comic Con to South Africa or to Africa as a whole. Telkom and VS Gaming in particular were looking for a platform that would give our local gaming leagues more international exposure. It became that natural fit. I think our strategies were complimentary.

What are your long-term aims as VS Gaming for Comic Con Africa? Will it become a yearly event?

I think in any investment when you look at its initial staging it’s all about the how the uptake is. This is the first event of its kind in South Africa and we’re really confident that it’s going to get traction. We will be making decisions based on how successful the inaugural event is. What is definitely of importance from a VS Gaming perspective is our commitment to creating exposure for local gaming. More events, giving more exposure for gaming and creating avenues and opportunities for South Africans and Africans to play on the big stages.

Will VS Gaming be at rAge as well this year? 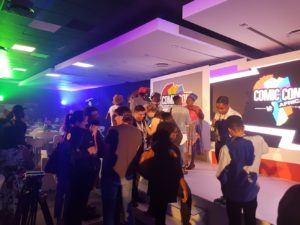 rAge and Comic Con Africa are being held only two weeks apart. Was it just that there wasn’t another date available? Or was it a strategic move to attempt to tap into the same audience that might usually attend rAge?

No, I think from a VS Gaming perspective it was a decision around what is happening internationally. Ensuring that availability of dates is also aligned to what is happening within the local market. What was key on our end was to find a date within the South African calendar that doesn’t conflict with any other event. We didn’t want a date that would cause any player to have to make a decision about where to go.

Game of Thrones and Big Bang Theory cast members were mentioned as attending Comic Con Africa at the launch. Troy Baker, Nolan North, and Felicia Day too. That all made us really excited! Do you have any more information on the celebrities that will be there?

I would love to share a lot more and we definitely will be doing so as the confirmations come through. I think the lineup that we’re looking at is exciting. As soon as the names come through, we’ll definitely communicate them to you. The celebrity lineup will run the full gamut with regards to entertainment, cosplay and even sports in general. Just wait for it!

Is there anything else that you could share with us that might make someone want to get themselves a ticket if they haven’t already?

We’ll be creating opportunities for people to have face to face interactions with the celebrities coming through. To take photos. To attend signings and traditional Comic Con panels. Opportunities that have not really been available in SA. Exactly like we did at our launch with South African legends and Black Panther cast members, John Kani and Connie Chiume. Like you indicated earlier, it’s never really been a natural fit to have esports and pop culture coming together. It’s having those two worlds in a safe and exciting space, that’s open to the whole family. As much as our conversation is centered around Comic Con, we’ve also got the eFootball competition happening that is in alignment with EA. We’ve got the qualifiers that show our commitment to opening up this event to international arenas. Giving gamers that space as well. It’s those type of exciting opportunities that we are bringing through to SA.

Do you have participation and interest from local and international movie studios in Comic Con Africa?

Oh yes. The strategy and initial conversations we are having are definitely around the studio launches of new series and new movies. We’re looking forward to that kind of representation at the event. We will also be communicating more details around that as we get closer to the event.

The first round of tickets seemed to sell quite quickly. Are you happy with how the ticket sales have gone?

Excited. I think it just goes to show that there is definite need and excitement for such an event in SA. It shows that putting esports and pop culture together has been widely accepted in the market.

You mentioned the eFootball championship earlier. Are there any other esports related news you’d be comfortable sharing?

We are working based off of our decade-long investment within esports. We are committed to always learning from the mistakes that we have made. Learning from some of the excitement and opportunities we’ve created as well as the great successes that we have had. To keep building and creating this world-class environment and event for SA. What we will be looking at doing is creating more streaming opportunities. It may not necessarily be at the events themselves, but rather keeping esports alive outside of just the events we create. Creating a greater presence for gaming within SA.

We’re most certainly eagerly awaiting September. Keep checking Esports Central for updates on VS Masters and Comic Con in the future.