Last week, we reported how South African tournament organizer Mettlestate, alongside several local personalities, from the likes of Luca “RoBoHoBo” Tucconi to SaltyMonkey and a whole lot more, ran a charity event. It was called Gamers Against Gender-Based Violence, and it ended up being one of the best things to watch this year.

From 1 to 8 August 2020, we had the pleasure of watching two local esports/gaming personalities stream for hours on end, playing their favourite games in the name of charity. Then, on 9 August, a marathon streaming event took place, with all 16 participants streaming from 09:00 to 17:00.

At the start of the marathon stream on 9 August, the charity event hit the R40,000 milestone. With two hours left, R50,000 was raised. Impressively, the Gamers Against GBV event ended up raising nearly R4,000 in the final two hours. A total of R53,995 was raised as the event came to its conclusion.

“We’ve reached the end of the #GamersAgainstGBV charity initiative & it couldn’t have gone better! You managed to raise R53 995 for the Saartjie Baartman Centre and raise awareness. THANK YOU! Thanks also go to all streamers who helped make this happen. We did it.” 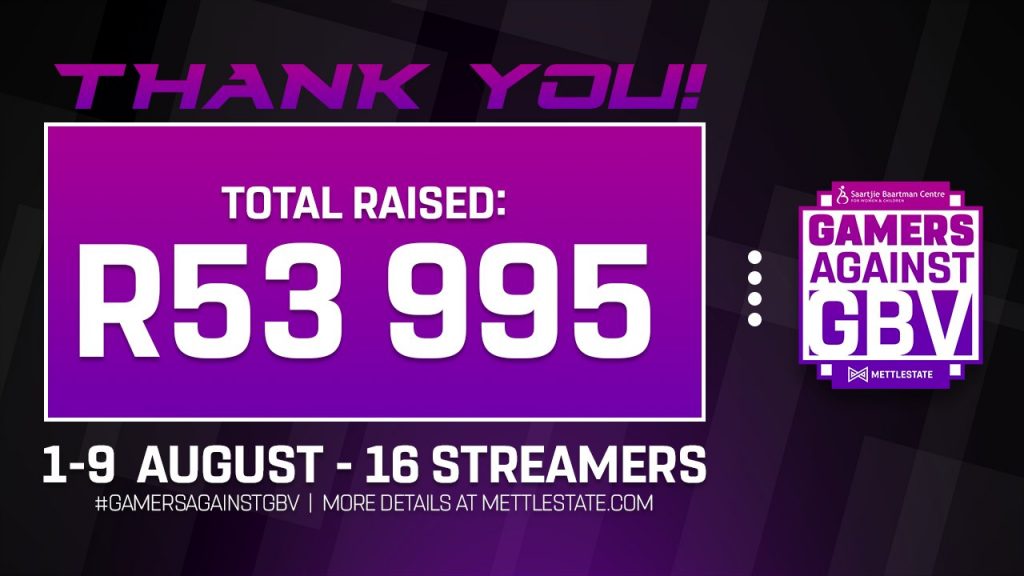 It was simply amazing to watch. We’d like to thank Mettlestate and all 16 streamers for participating in this event.

We had a great time watching some of our favourite streamers. The Gamers Against GBV charity event proved how South African gamers can come together, and highlighted what a fantastic community we all have.