The Boomsday Project is coming to Hearthstone

Dr. Boom is coming back to Hearthstone, and this time we won’t be underestimating him. He’s bringing with him a team of scientists and their kooky spells and inventions in The Boomsday Project.

Much like in Goblins vs Gnomes mechs are once again a theme in this expansion. They are a little different to the mechs of old though. This time the mechs are coming with a new keyword, Magnetic. 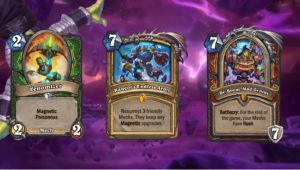 This allows a Magnetic mech to fuse with a mech on the board, adding its stats and any effects to the other mech. This sort of gameplay encourages board based strategies with a critical mass of mechs. Hunter, Paladin, and Warrior are the classes that will feature mechs with Magnetic. This style of gameplay suits Paladins and Hunters, who tend to focus on board control and snowballing a board to victory.

Hunters have been given the most aggressive mech minions, with early curving Magnetic mechs and mech synergy cards. Paladins have a more value based strategy presented to them, with Kangor’s Endless Army and some good value Magnetic mechs providing more value in the mid to late game. Warrior is the class of Dr. Boom himself.

Hero cards have proven powerful throughout the recent Hearthstone expansions, so we can probably expect Dr. Boom to increase Warriors power level and save them from the current slump that the class finds itself in. Hunter will probably stick to its current archetypes whilst Paladin is also a class that needs some help, and will be hoping Magnetic proves powerful. Magnetic is a mechanic that is very vulnerable to silence and single target removal, so if Magnetic is powerful, we can expect silence cards to see more play.

All 9 class are represented by a Legendary scientist, but not all scientists are created equally. 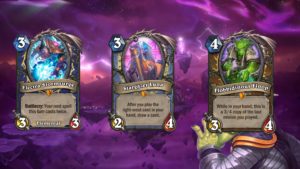 Electra Stormsurge was the first scientist revealed to us, and is among the most powerful of all. Electra Stormsurge provides many different options for Shaman, from elemetal synergy, to powering up the board clear and burst damage spells of Shaman. Ultimately Even Shaman and Shudderwock Shaman will likely the remain the two prominent Shaman archetypes, with some improvements. This leaves Shaman in a pretty good place overall.

Stargazer Luna is the Mage scientist, with a very powerful effect in the right deck. The big question for Mage is will they have a powerful enough deck to support Luna? In my opinion, no. Mage is looking to be pretty weak in the upcoming Boomsday meta. Its two current decks are weak against some of the currently strongest classes and those that are getting better.

Speaking of classes that are getting better, Druid has a very powerful scientist. Flobbidinous Floop does not only have an amazing name, but also a powerful effect. Flobbidinous Floop is powerful in almost all the current Druid decks, and might encourage entirely new builds as well. The rest of the Druid cards in this set? Pretty good. Druid in Boomsday? Really good. Druid in Tournaments? Ban it!

All 9 classes are also getting powerful Legendary Spells, for the first time in Hearthstone. Druid gets best of both worlds with a powerful spell as well, but let’s look at the other classes. 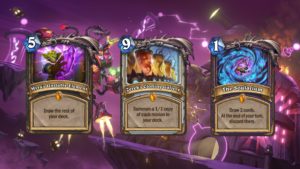 Myra’s Unstable Element is the Rogue Legendary spell, an incredibly powerful effect that allows you to build the most aggressive Rogue decks possible. This card has synergies beyond aggressives decks and will surely be an interesting card to play with. Blizzard have often tried to push Deathrattle Rogue as an archetype, but they finally might have made something to convince me to give it a try. Necrium Blade, the new Rogue Weapon, gives us a couple interesting synergies, and as we have seen in hunter, the ability to trigger your deathrattles is really powerful. The existing Rogue archetypes will still be around, with some extra support, but let’s see if we can build a new one as well.

Warlock has some powerful decks already, and there are some really interesting Warlock cards in The Boomsday Project. The Warlock legendary spell, The Solarium allows you to draw cards in your deck for a very efficient cost, but you only get full use from it if you can play those cards immediately. So this seems perfect for Zoo, a deck that has come into its own in the late Witchwood meta. There are some other powerful Warlock cards as well that support Zoo, Even Warlock and Cube Warlock. These are probably the cards and archetypes that will matter most for Warlock. Warlock seems like it will be ok, as it still has many powerful cards from previous expansions available to it.

So where does that leave us?

If we look at the meta as a whole, we can speculate a tier ranking for the classes after The Boomsday Project releases. Druid is the clear leader, sitting alone on top of the mountain, with it’s powerful new cards adding to it’s already existing archetypes. Shaman, Hunter, Paladin, Rogue and Warlock are all getting some powerful tools and sit just below Druid in Tier 2. Adding to new tools, the existing archetypes for these classes are powerful enough that we can expect them to all be pretty good.

Priest doesn’t see much movement in The Boomsday Project meta. I don’t have much confidence in Zerek’s Cloning Gallery to carry the new Priest archetype. Quest and Deathrattle Priest looking like the best options for the class. This might allow the deck to move into Tier 2, but we will have to wait and see.

Warrior is in a pretty bad place right now, but Hero cards are good, and they got Dr. Boom. This might be enough to bring them up from the absolute bottom tier, but I don’t think it’s enough to push the class into Tier 2.

Finally, Mage sits at the bottom. Ever since the rotation of Ice Block to the Hall of Fame, Mage has struggled to hold a place in the meta. Aggro/Tempo Mage struggles against board based strategies, and those seem to be getting stronger. Big Spell/Control Mage is the only hope for the mage class, and I’m not convinced that deck is even very good right now, and with other classes late game options improving, it’s going to be even trickier for Big Spell Mage.

If you want to hear more about my, and Dale “Pand3m0nia” Pon’s thoughts on all the individual cards, and some possible decklists to try on day one of the expansion (7th August), then check out this playlist.