The TI10 Collector’s Cache Volume II features 17 cosmetic item sets in total, with a variety of heroes. It includes a Rare set for Templar Assassin, a Very Rare set for Faceless Void, and an Ultra Rare set for Legion Commander. The latter will be marketable “sometime after The International 11 completes.”

The TI10 Collector’s Cache Volume II sells for R43 each and features escalating odds. This means that the more you open, the better your chances of getting one of the rare items.

“Volume II of the Collector’s Cache will only be available for the next thirty days and is the only way to receive these exclusive item sets, apart from the Ultra Rare Legion Commander set which will be marketable sometime after The International 11 concludes. As before, 25% of each sale contributes directly to The International 10 prize pool.”

Further, if you get some duplicates (or just don’t like a specific set),  you can recycle it for 2 Battle Pass levels. If you open a total of 14 treasures, you also get 34 Battle Pass levels for your troubles.

At the time of writing, the TI10 prize pool sits at a whopping $33.3 million At the current Dollar to Rand exchange rate, that’s R578 million. Since the release of the TI10 Collector’s Cache Volume II, the prize pool has grown by roughly $2 million in just a few days.

As you can see in the image below via Dota 2 Prize Pool Tracker, there’s a massive spike, as the TI10 prize pool closes in on esports history. 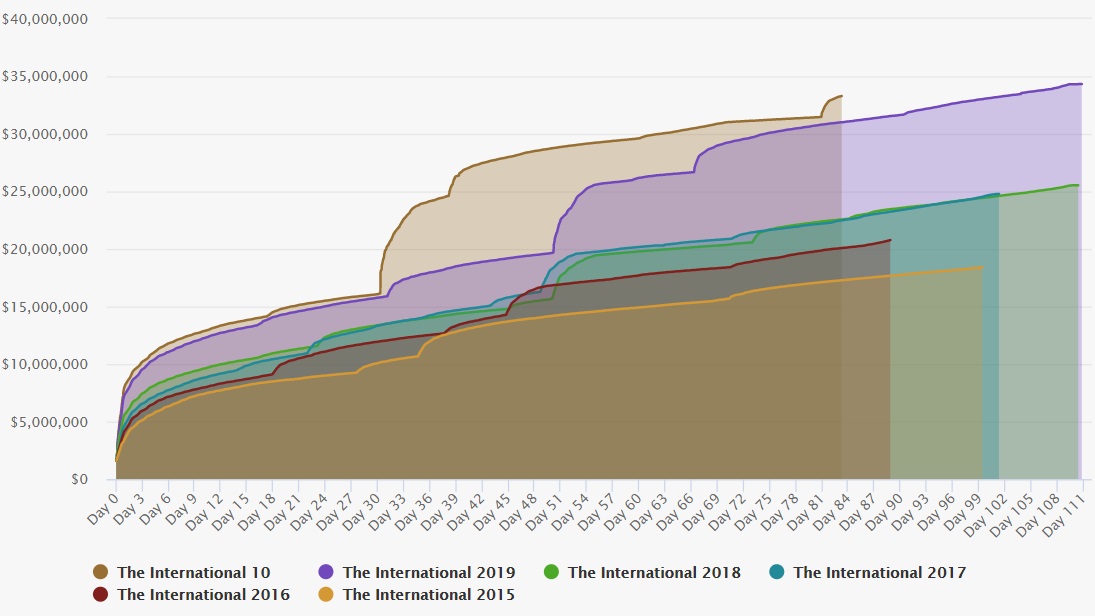 The biggest prize pool in esports history, currently, is TI9’s $34.3 million. It seems very likely TI10’s prize pool will shatter this record before the Battle Pass ends on 19 September 2020.